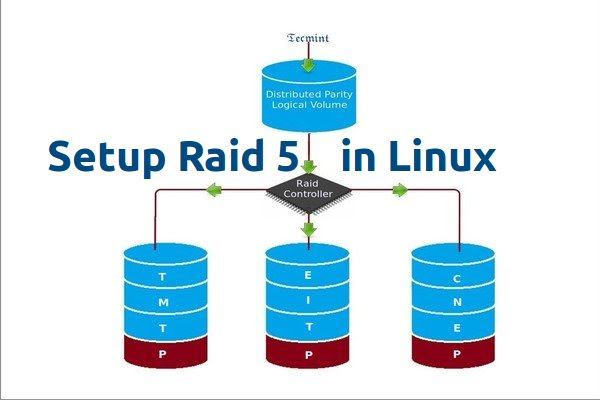 Setup Raid 5 in Linux
For RAID Level it should have at least three hard drives or more. RAID 5 are being used in the large scale production environment where it’s cost effective and provide performance as well as redundancy.

Parity is a simplest common method of detecting errors in data storage. Parity stores information in each disks, Let’s say we have 4 disks, in 4 disks one disk space will be split to all disks to store the parity information’s. If any one of the disks fails still we can get the data by rebuilding from parity information after replacing the failed disk.

Pros and Cons of RAID 5

Minimum 3 hard drives are required to create Raid 5, but you can add more disks, only if you’ve a dedicated hardware raid controller with multi ports. Here, we are using software RAID and ‘mdadm‘ package to create raid.
mdadm is a package which allow us to configure and manage RAID devices in Linux. By default there is no configuration file is available for RAID, we must save the configuration file after creating and configuring RAID setup in separate file called mdadm.conf.
Before moving further, I suggest you to go through the following articles for understanding the basics of RAID in Linux.

This article is a Part 4 of a 9-tutorial RAID series, here we are going to setup a software RAID 5 with distributed parity in Linux systems or servers using three 20GB disks named /dev/sdb, /dev/sdc and /dev/sdd.

1. As we said earlier, that we’re using CentOS 6.5 Final release for this raid setup, but same steps can be followed for RAID setup in any Linux based distributions. 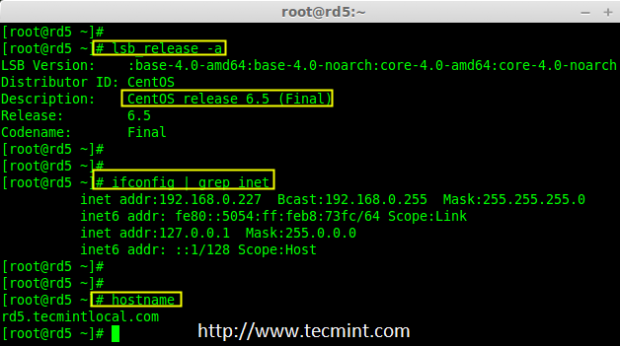 CentOS 6.5 Summary
2. If you’re following our raid series, we assume that you’ve already installed ‘mdadm‘ package, if not, use the following command according to your Linux distribution to install the package.
3. After the ‘mdadm‘ package installation, let’s list the three 20GB disks which we have added in our system using ‘fdisk‘ command. 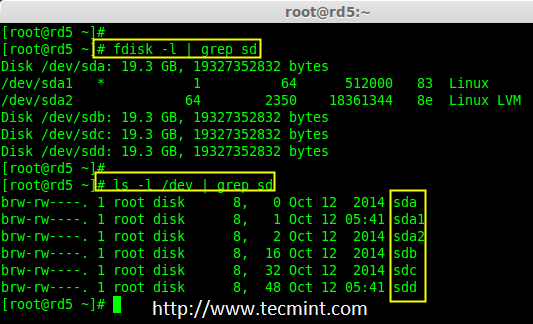 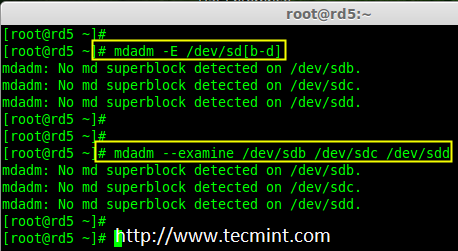 Examine Drives For Raid
Note: From the above image illustrated that there is no any super-block detected yet. So, there is no RAID defined in all three drives. Let us start to create one now.

If mdadm RAID superblock is found do the following

Example when there is already mdadm superblock

As you can see, mdadm detects a raid superblock on /dev/sda, where it should not.

to see what metadata version was used on the old array. If it's 0.90, you should be able to zero the superblock with mdadm.
Code:
mdadm --zero-superblock /dev/sd[b]

Step 2: Partitioning the Disks for RAID

5. First and foremost, we have to partition the disks (/dev/sdb, /dev/sdc and /dev/sdd) before adding to a RAID, So let us define the partition using ‘fdisk’ command, before forwarding to the next steps.

Please follow the below instructions to create partition on /dev/sdb drive. 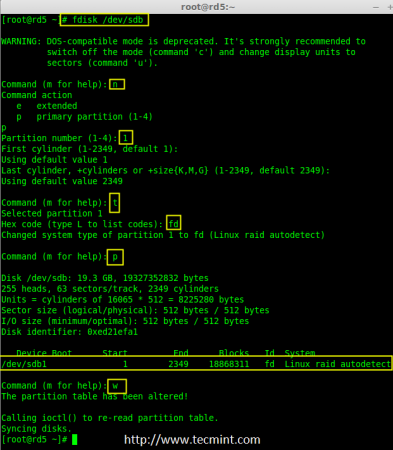 Create sdb Partition
Note: We have to follow the steps mentioned above to create partitions for sdc & sdd drives too.

Now partition the sdc and sdd drives by following the steps given in the screenshot or you can follow above steps. 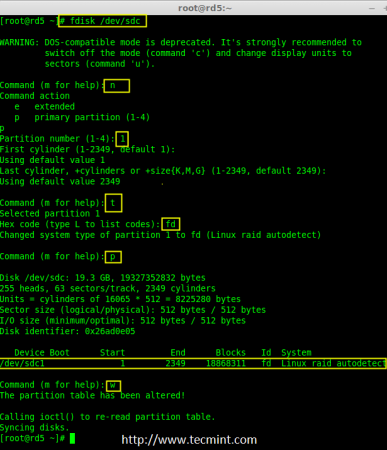 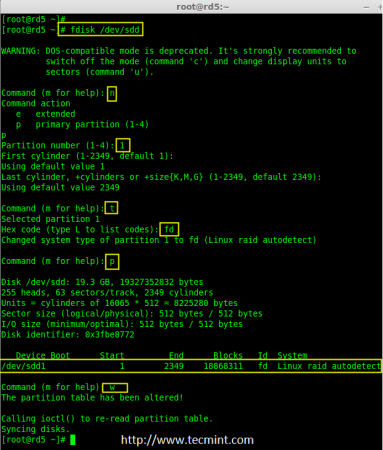 Check Partition Changes
Note: In the above pic. depict the type is fd i.e. for RAID.
7. Now Check for the RAID blocks in newly created partitions. If no super-blocks detected, than we can move forward to create a new RAID 5 setup on these drives.

8. Now create a Raid device ‘md0‘ (i.e. /dev/md0) and include raid level on all newly created partitions (sdb1, sdc1 and sdd1) using below command.
9. After creating raid device, check and verify the RAID, devices included and RAID Level from the mdstat output.

Verify Raid Device
If you want to monitor the current building process, you can use ‘watch‘ command, just pass through the ‘cat /proc/mdstat‘ with watch command which will refresh screen every 1 second. 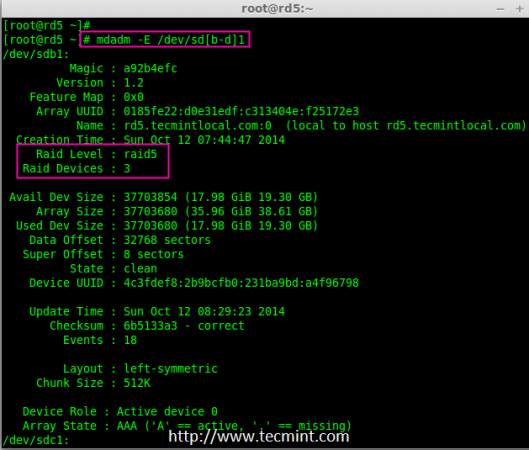 Verify Raid Level
Note: The Output of the above command will be little long as it prints the information of all three drives.
11. Next, verify the RAID array to assume that the devices which we’ve included in the RAID level are running and started to re-sync. 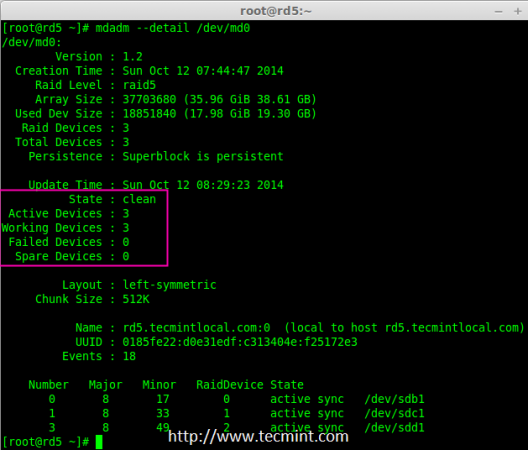 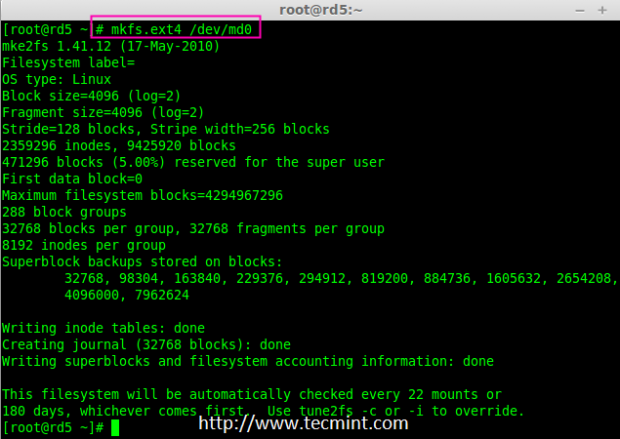 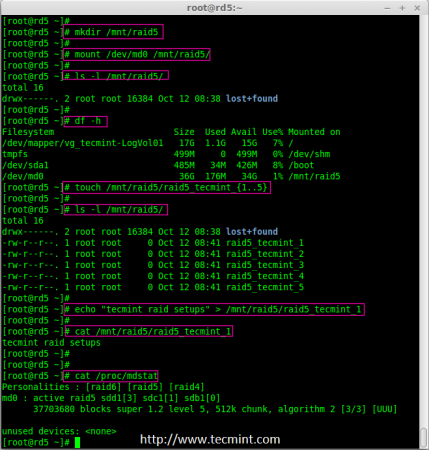 Mount Raid Device
15. We need to add entry in fstab, else will not display our mount point after system reboot. To add an entry, we should edit the fstab file and append the following line as shown below. The mount point will differ according to your environment. 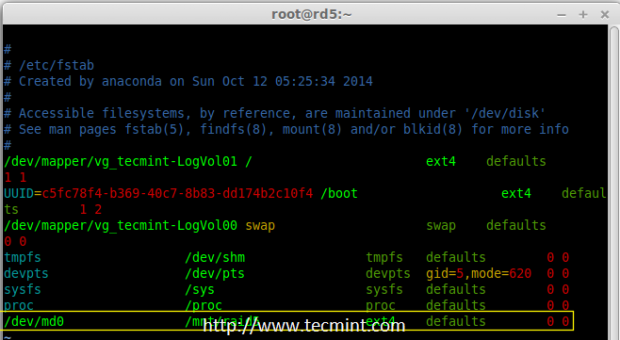 Raid 5 Automount
16. Next, run ‘mount -av‘ command to check whether any errors in fstab entry.

17. As mentioned earlier in requirement section, by default RAID don’t have a config file. We have to save it manually. If this step is not followed RAID device will not be in md0, it will be in some other random number.
So, we must have to save the configuration before system reboot. If the configuration is saved it will be loaded to the kernel during the system reboot and RAID will also gets loaded.

Save Raid 5 Configuration
Note: Saving the configuration will keep the RAID level stable in md0 device.

18. What the use of adding a spare drive? its very useful if we have a spare drive, if any one of the disk fails in our array, this spare drive will get active and rebuild the process and sync the data from other disk, so we can see a redundancy here.
For more instructions on how to add spare drive and check Raid 5 fault tolerance, read #Step 6 and #Step 7 in the following article.

Here, in this article, we have seen how to setup a RAID 5 using three number of disks. Later in my upcoming articles, we will see how to troubleshoot when a disk fails in RAID 5 and how to replace for recovery.